The Future of Rugby Refereeing: PART ONE | Richard Every | LinkedIn

Remember that book, “Laws of The Game, Rugby Union”? Well, Law 6.A.4 (a) states: “The referee is the sole judge of fact and of Law. The referee must apply fairly all the laws.”

The key word is “fairly”. That Law makes it essential to provide match officials development, support and opportunity to be successful and to achieve greater consistency and accountability, delivering an exciting, fast-paced and probably a high-scoring product. The referee’s ultimate goal is to provide a fair environment so teams can compete with integrity and on a level playing field.

To achieve that goal we look at a two-pronged approach, TACTICAL and STRATEGICAL. This is a philosophy, and not about technical proficiencies required by all referees. It goes without saying that you need to know the laws and be able to identify them in practice.

Notes from Richard Every: As the clarification and minor Law Amendments are being used in the Americas Rugby Championship, we will be implementing them this season with immediate effect.

The main alterations are:
1) No more “turnover wheel” in scrums.
2) Added a clear “use it or lose it” in scrums.
3) Losing scrum half must stay out of pocket.
4) Formal sanction for feinting that you were fouled.
5) A player injured through foul play may be replaced by a player who was previously substituted.

Attached is the latest clarification from World Rugby. It concerns the minimum number of players allowed in a 7s game and needs no further explanation. Please distribute to the Local Referee Organizations, Unions, Conferences and referees in your areas.

Feel free to write me with any questions,

Note: read the text. Read it. DO NOT make up your own laws/rules about this. This is for someone who has picked the ball up. 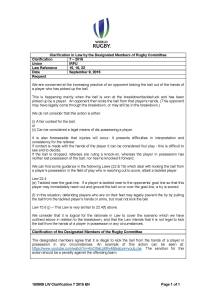 Please review the recent Law Clarification from World Rugby regarding the increasing practice of an opponent kicking the ball out of the hands of a player who has picked up the ball.

We had a situation in the NYAC v Mystic River match this past weekend where the NYAC coach thought incorrectly that there was a knock missed that led to a try. The coach was then seen on the field behind the posts and after the conversion, he confronted the AR on the field.

If a coach walks onto the field during the game, unless the referee allows the coach to enter the field, the coach should be sent off the field and warned ONCE. If they repeat the offense or any form of abuse toward the officials, then EJECT them from the grounds. This is not acceptable behavior and will not be tolerated.

Verbal abuse by team coaches, team staff or team substitutes directed at match officials or players should not be tolerated and the following process should be followed:

NOTE: The referee then restarts the game according to the latest stoppage and should NOT award a penalty due to the sideline behavior.

Hello all,
I have finished a training video on obstruction and it is up and ready for viewing. TRO and LRO administrators, please pass this email on to all of you referees, and teams so they know about it and can watch it.

The latest Clarification is attached. It addresses yet another iteration of the “what if” involved in front row replacements and is pretty clear. Please distribute to teams, unions, conferences and referees in your area.
Feel free to write me with any questions.
All the best,
Peter Watson
Chair, Law Committee
[gview file=”https://rsvsport.files.wordpress.com/2019/12/18045-150909-cl-law-clarification-6-2015-front-row-replacements.pdf”%5D

Schedules are due on Aug 1 for the Fall Season and Feb 1 for the Spring Season. Go to "FOR CLUBS" & "REQUEST A REFEREE".